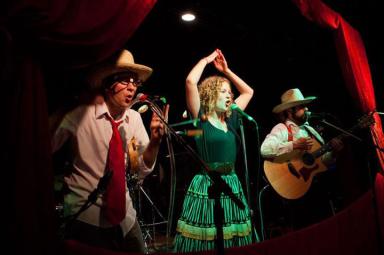 The IWFF Awards just got a whole lot more fun! The evening begins with a CD release party for the new record by Missoula’s own Whizpops! – the fun and lively band that the Missoulian calls “kids’ music done right.” Following the show we’ll announce the Best Of Fest and Merit Award winners.  After the awards stick around for two extraordinary IMAX productions Journey To the South Pacific and Island Of Lemurs: Madagascar.

Anatomy of a Story – an informative session hosted by NATURE’S Janet Hess. 10:00 am-12:00 pmLife on Terra (with sponsored pizza lunch) A look at the successful Life On Terra podcast hosted by filmmaker and MSU faculty member Gianna Savoie. Sponsored by MSU. 1:00 -2:30pm (Pizza at Noon)New Technologies/New Behaviors – How are high tech drone cameras and micro field units revealing behaviors we never knew? How can science utilize this knowledge for better conservation? Featuring Elizabeth White, Producer/Director at the BBC Natural History Unit and Beau Larkin from MPG Ranch. 3:00 – 4:30 pmAward ceremony and iMax Showcase at the Wilma Theater – 7:00 pmCheck out a PDF of our Program Booklet

Comedian Bill Bailey tells – and joyfully re-enacts – the story of Alfred Russel Wallace, the “geeky Victorian collector” whom Bailey paints as the greatest naturalist of his era. Wallace’s role in working out how species evolved has been overshadowed by Darwin: each independently came up with the theory of evolution, but Wallace’s tireless efforts, collecting tens of thousands of specimens in the islands of what is now Indonesia, have been sidelined. Bailey wants him back in the pantheon, so he retraces Wallace’s steps and has fun catching frogs, meeting monkeys and eating toasted dragonflies. You can tell he’s in his element, crashing through jungles, wading in rivers, pinning butterflies to boards  – with a payload of fascinating history on a neglected hero.

Northern Mozambique’s Cyao people both revere and struggle against wildlife on a daily basis. To help them cope they regularly call on their ancestral spirits, some of whom are embodied in animals. This invisible realm called ‘Majini’ greatly influences how people think and act. It seems to be connected to just about everything from man-eating lions and the bushmeat trade to the elephant poaching crisis sweeping across Africa today. ‘Spirit Creatures’ documents Keith and Colleen Begg’s journey to gain a deeper understanding of people’s spiritual relationships with wildlife inside Mozambique’s Niassa National Reserve. They are lead to an important sacred site called Chemambo where all the yellow baboons are believed to be people. Understanding local culture helps the Begg’s become more effective conservationists.

Three tiny orphaned jaguar cubs are discovered in a Brazilian forest. A family decide to take the place of their mother and train them to become wild again. Over two years they must learn to climb trees, swim, and hunt for their dinner. If they can be successfully released, it will give new hope to these rare animals. Narrated by Zoe Wanamaker.

Academy Award® winner Morgan Freeman narrates Island of Lemurs: Madagascar, the incredible true story of nature’s greatest explorers – lemurs. Captured with IMAX 3D cameras, the film takes audiences on a spectacular journey to the remote and wondrous world of Madagascar. Lemurs arrived in Madagascar as castaways millions of years ago and evolved into hundreds of diverse species but are now highly endangered. Join trailblazing scientist Patricia Wright on her lifelong mission to help these strange and adorable creatures survive in the modern world.

Narrated by Cate Blanchett, Journey to the South Pacific will take moviegoers on a breathtaking IMAX® adventure to the lush tropical islands of remote West Papua, where life flourishes above and below the sea. Join Jawi, a young island boy, as he takes us on a journey of discovery to this magical place where we encounter whale sharks, sea turtles, manta rays, and other iconic creatures of the sea. Home to more than 2,000 species of sea life, this exotic locale features the most diverse marine ecosystem on earth. An uplifting story of hope and celebration, Journey to the South Pacific highlights the importance of living in balance with the ocean planet we all call home. With stunning photography by 2013 IWFF Lifetime Achievement Award Winner Howard Hall.