At The UC Theatre at The University of Montana, 6 pm. FREE ADMISSION 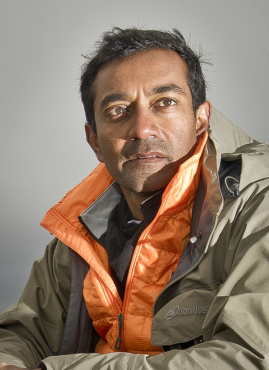 IWFF and The University of Montana are pleased to welcome leading global conservation scientist, writer and an Emmy-nominated news contributor Dr. M. Sanjayan to this year’s festival to present an episode from his upcoming Showtime documentary series Years Of Living Dangerously.

Sanjayan has focused on the role of conservation in improving human well-being, wildlife and the environment.  He serves on Conservation International’s senior leadership team as Executive Vice President and Senior Scientist.

Sanjayan’s broad-reaching television experience includes numerous documentaries for Discovery Channel and the BBC and serving as a frequent contributor to CBS News.  He is currently filming his new TV series, Earth – A New Wild airing on PBS in 2015.  He is also the science correspondent for Years of Living Dangerously, a Showtime documentary series debuting in April 2014. In January 2014 he returned as the featured contributor to the BBC World News series The Power of Nature.

His scientific work has been published in journals including Science, Nature and Conservation Biology. Raised in Sri Lanka and Sierra Leone, Sanjayan’s unique background and expertise have also attracted mainstream media coverage in Outside, Men’s Journal, National Geographic Adventure, Afar and The New York Times.

Sponsored by The President’s Office at The University of Montana

Daylong Field Trip to the National Bison Range and the breathtaking Mission Mountain Range – Sponsored by Nature. 9:30 am – 2 pmCanon Camera Demonstration – Capture the views of and learn about Canon’s new line of cinema cameras during the National Bison Range field trip. 9:30 am – 2 pmAfter Party – Sponsored by the School of Film and Photography, MFA in Science & Natural History Filmmaking at MSY. The Loft, 119 W Main St. 8:00 pmCheck out a PDF of our Program Booklet

Legends of the Deep: The Giant Squid

The giant squid is a perfect example of what is still a deep-sea mystery in the 21st century. Reaching amazing lengths of up to 18 meters, they are the largest squid in the world, yet they have never been seen alive in the deep sea. One of best chances of encountering a giant squid is in the waters off the Japan’s Ogasawara Islands. Using two state-of-the-art submersible vessels and special ultra-sensitive, high-definition cameras for deep-water use, film crews, along with some scientific experts, launched an expedition 1,000 meters beneath the sea. After 100 dives totaling 400 hours, they finally succeeded in capturing footage of a giant squid in its natural, deep-ocean habitat. The previously unseen, shimmering beauty of a giant squid lies ahead.

The Mystery of Eels

Though much of the natural world is discovered and understood, a few great mysteries remain. Consider the eel, unappealingly snake-like and slimy, with strong jaws and rows of sandpapery teeth. Aside from these fearsome qualities, we know little about the life of this amazing fish. Where it goes, what it does, and how it dies, nobody knows. Hailed by poets as the siren of the North Sea, this shadowy creature has fascinated researchers for centuries. And now James Prosek, artist, writer, and eminent naturalist, takes on the mystery of eels, shedding light on the cultural history, biology, and economics surrounding the creature, as well as the passions it inspires in those who seek to know it. Produced by Nature/WNET.

Aatsinki: The Story Of Arctic Cowboys

One year in the life of a family of reindeer herders in Finnish Lapland. A study of hard work, hard earned leisure, and an intricate bond between man and nature. Brothers Aarne and Lasse Aatsinki are cowboys of the Arctic. Quiet but good natured, dare-devilish but humble, rugged but gentle, and exceptionally knowledgeable when it comes to their little slice of wilderness. These men are what John Wayne wanted to be. The brothers, along with their wives and children, live well north of the Arctic Circle in Finnish Lapland, where they are the leaders of a collective of traditional reindeer herders who manage the last group of wild reindeer in all of Finland. Aatsinki follows the family for the span of one year, quietly observing their seasonal routines and the difficulties and joys of a life so closely tied to the land.