Congratulations to our Winning Films!

After viewing, deliberating and debating, the IWFFl’s competition jury has reached consensus on our awards categories. The winners are: 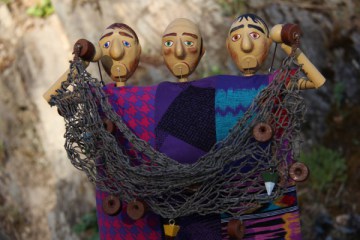 IWFF is please to welcome a magical, musical puppet show by the immensely talented Bat Honey. Follow the young boy Gumeris as he encounters a magic book, a misunderstood squid, an Ambassador Gorilla, and many more in his quest to uncover the mystery of the missing fish in this puppet musical extravaganza! “Squidbelly” features an original script, original songs and fifteen handmade puppets!

Bat Honey is comprised of Britt Juchem and Ariel Gregory, a Missoula-based artist duo. Their art is uniquely comedy-driven and possesses a surreal approach to storytelling which reflects their unique perspective.  They have toured nationally with shows in Portland, Seattle, Los Angeles, Chicago, Washington D.C., Baltimore, and Boston.  They also tour the rural communities of Montana performing in libraries and small schools.

Sponsored by the Montana Arts Council

11:00 am: SPECIAL FEATURE: Squidbelly
11:15 am: Catalina Island and Meet the Coywolf12:15 pm: Tiger Experiment and Orangutans: The Great Escape1:15 pm: Sticky and Plastic Paradise: The Great Pacific Garbage Patch2:00 pm: Cheetah Race to Rule and Islands, Philippines: Islands of Mystery3:15 pm: We are the Land and Elemental4:30 pm: White Diamond5:30 pm: Land of the Tiger, Tide, and Arabian Goddess7:00 pm: AWARDS SCREENING: Pride, Catalina Island and Touching the Wild7:15 pm: AWARDS SCREENING: Killer Whales: Beneath the Surface and On a River in Ireland

Check out a PDF of our Program Booklet

Just 22 miles off the coast of Los Angeles lies Santa Catalina Island. Home to over 25 endemic plant and animal species, Catalina is the last bastion of true wildland in Southern California. Catalina Island’ explores the unique ecology and conservation strategies taking place on the island as told through the eyes of the island’s most iconic species: the American Bison, the Catalina Island Grey Fox, and the Bald Eagle.

A mixture of western coyote and eastern wolf, the coywolf is a remarkable new hybrid carnivore that is taking over territories once roamed by wolves and slipping unnoticed into our cities. Its appearance is very recent – within the last 90 years – a blip in time in evolutionary terms. Beginning in Canada but by no means ending there, the story of how it came to be is an extraordinary tale of how quickly adaptation and evolution can occur, especially when humans interfere. Tag along as scientists study this new top predator, tracking it from the wilderness of Ontario’s Algonquin Park through parking lots and backyards in Toronto all the way to the streets of New York City.

Tigers are under threat. Poaching and the destruction of their habitat are the main reasons why their wild populations have decreased by a frightening 96 percent – to around 4000 individuals. About half of them live in India. The decision about their future has to be made there. When a wild tigress left behind two orphaned cubs, instead of taking them to the zoo, they were raised by the forest department and reintroduced to the wild. It is the first such effort in the world that could perhaps set a precedence for the future. But will these tigers behave like their wild counterparts, could they even become man-eaters? If this experiment proofs to be successful, it would open up completely new avenues for conservation.

Leonora is no ordinary orangutan, she is a pioneer. With her three year old son in her arms, she is about to set off on an epic journey back to the wild – the great ape escape. It is a long way from what she is used to. After being orphaned as a baby, she has spent the majority of her life in a rescue centre. She is leaving behind 600 other orangutans, all of whom are relying on her for their chance at freedom. If Leonora can make it, they could too.

Exiled from the tropical paradise where they evolved, a handful of remarkable stick insects, the last of their kind, clung to life on a single, windswept bush on a remote sea stack for 80 years. Now they’re back from the brink of extinction, but when can they go home?

Angela Sun’s journey of discovery to one of the most remote places on Earth, Midway Atoll, to uncover the truth behind the mystery of the Great Pacific Garbage Patch. Along the way she encounters scientists, industry, legislators and activists who shed light on what our society’s vast consumption of disposable plastic is doing to our oceans, and what it may be doing to our health.

Gunner is a young cheetah born into a cheetah coalition. From the moment he opens his eyes the odds are stacked against him. He is the runt of the litter. And from now on, Gunner will have to fight hard for every scrap of food and attention. But when both his siblings are tragically killed Gunner becomes the sole survivor and carries a new burden. His coalition is destroyed. Life becomes harder by the day and without support from his brothers, defending his territory grows more difficult. Against all odds Gunner rescues his legacy and earns his territory. Gunner’s no longer a runt, he’s a ruler!

The Philippines, over 7,000 islands, forming one of the most ancient archipelagos in the world where both the wildlife and the people have had to adapt to survive. Much of the country is mountainous and suffers earthquakes and eruptions from around 20 active volcanoes. Typhoons and strong storms assault the coast, shaping human civilisations. Enveloped within an otherworldly landscape of sea, jungle and insurmountable cliffs – the Philippines harbours one of the highest bio-diversities of wildlife on the planet. A vast number of species are endemic to the Philippines including the Philippine Tarsier, Carnivorous Plant species and the Palawan Bearcat. On these isolated islands, it is not only the wildlife that has had to adapt to survive, so too have the Filipino people…

We Are The Land

Elemental tells the story of three individuals united by their deep connection with nature and driven to confront some of the most pressing ecological challenges of our time. The film follows Rajendra Singh, an Indian government official gone rogue, on a 40-day pilgrimage down India’s once pristine Ganges river, now polluted and dying. Across the globe in northern Canada, Eriel Deranger mounts her own “David and Goliath” struggle against the world’s largest industrial development, the Tar Sands, an oil deposit larger than the state of Florida. A young mother and native Denè, Deranger struggles with family challenges while campaigning tirelessly against the Tar Sands and its proposed 2,000-mile Keystone XL Pipeline, which are destroying Indigenous communities and threatening an entire continent. And in Australia, inventor and entrepreneur Jay Harman searches for investors willing to risk millions on his conviction that nature’s own systems hold the key to our world’s ecological problems.

Acclaimed filmmaker Werner Herzog follows enigmatic airship engineer Dr. Graham Dorrington as he embarks on a trip in the heart of Guyana to test his new helium-filled invention above the rainforest. Dubbed the “white diamond” on account of its unique teardrop shape, the expedition begins with some early mishaps but is soon airborne high above the treetops. With every success though, Dorrington is haunted by a similar expedition twelve years ago that killed his friend as they were testing an airship much like the “white diamond.” Herzog magnificently captures Dorrington’s struggles to atone for what he calls “a stupid, meaningless accident” while at the same time presenting stunning never-before-seen images of the true beauty of nature.

Land of the Tiger, Tide, and Arabian Goddess

The world’s largest mangrove delta — the Sunderbans, bordering Bay of Bengal in South Asia is well-known for its Royal Bengal Tigers and its unique Eco system. But little is known of the indigenous forest communities, surviving at the edge of this tiger territory for generations. They are compelled to enter into these menacing forests day after day, out of hunger– in search of fish and crabs or honey. Life to them, is striking a constant balance with death while braving the tigers and tides in these watery jungles. The film explores the livelihood challenges of the natives, their culture and ethos reflected through their ultimate kinship they share with the forests and its terrifying protagonist- the man eating tiger.

Pride explores the cultural relationship between residents of Gujarat, India and the last remaining population of Asiatic Lions in the world. With fewer than 50 lions living in the wild at the turn of the 20th century, rural communities started working with the government to create a haven for this top predator and are successfully securing this animal’s place in the ecosystem.

Joe Hutto’s idea of research is anything but normal, dedicating seven years of his life to becoming a wild mule deer. Incredibly, these keenly intelligent animals come to regard this stranger as one of their own. Accepted by the matriarch, he walks among them and can lie with a pregnant doe talking to its unborn fawns. As he crosses the species divide Joe is tapping into a new understanding about these elusive animals. The captivating joy he feels for his new family is nothing short of infectious, but this human predator also learns to see the world from the point of view of prey – sharing their world so personally finally takes a toll that sends him back to his own kind. Produced by Nature/WNET.

Killer Whales: Beneath the Surface

The killer whale was long feared as a sea monster until, in May 1964, one was brought into captivity for the first time. This spawned a journey of discovery into the killer whale’s true nature. It quickly became clear, these were not mindless killers – they were, in fact, highly intelligent social creatures. Today, our understanding is deepening still further and the latest revelations are among the most sensational – not only will these top predators ‘adopt’ and care for injured and abandoned orphans, but it seems there’s no longer just the ‘killer whale’.

On A River In Ireland

On a River in Ireland follows Colin Stafford Johnson on a journey along the River Shannon – Ireland’s greatest geographical landmark and the longest river in Ireland and Britain.For 340km, the river carves its way through the heart of the country, almost splitting the country in two. On its journey, the Shannon passes through a huge palette of rural landscapes, where on little known backwaters wild animals and plants still thrive as almost nowhere else in Ireland. The film follows the river from dawn to dusk over four seasons capturing it’s ever changing moors and exploring the countless waterways, islands and lakes that make up the entire river system.